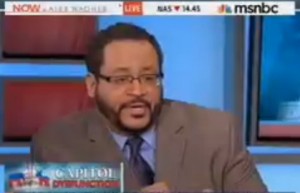 On Tuesday afternoon’s Now with Alex Wagner, MSNBC contributor and frequent fill-in hot Michael Eric Dyson placed the upcoming standoff on the debt ceiling into a new old context, provocatively telling the panel not to hold their breath for a sudden burst of reason from Republicans in Congress. While some on the panel thought the GOP would back down under pressure from the financial sector, Prof. Dyson remarked, “Never underestimate the visceral intensity or the poetic allure of negrophobia,” adding “They are completely committed to that. That’s what Obama is facing.”

The comment drew a somewhat stunned look from Bloomberg’s Josh Green, but beyond that, the conversation continued apace, as host Alex Wagner tossed to Luke Russert for his analysis of the debt ceiling fight:

To Alex’s point, the defense cuts in the sequester are President Obama’s best chance to play offense against the Republicans’ conscious threat of global financial disaster. The President has promised that he will not negotiate with Republicans on the debt ceiling, but he can take the fight to them by refusing to negotiate on the sequester cuts until Congress passes a clean debt ceiling increase, along with the Mitch McConnell plan, which would require a 2/3 majority to stop a debt limit increase by the President.

Prof. Dyson’s comment, and the panel’s reaction to it, are a good example of the fruits of the diversity that MSNBC President Phil Griffin spoke of in a recent Mediaite interview. On the current media landscape, you can bet that clip will show up on Newsbusters or Breitbart TV, and seems like a bid for attention in a media world with jittery attitudes about discussing race, but as Griffin said, MSNBC aims to “reflect” their viewers’ world. In the real world, people don’t faint and fan themselves when someone acknowledges the ways in which race colors the actions of white establishment figures.

More to his specific point, though, no one ever seems to think twice when members of that establishment blame President Obama for not establishing “relationships,” while completely disregarding the relentless and deranged, and often overtly racist, opposition he has faced for four years, or the complete hot-messitude of the folks whom the President can’t seem to charm. That point of view is represented on MSNBC as well, and without Prof. Dyson sitting at the table, the low hum of “He’s not one of us” might go unnoticed.