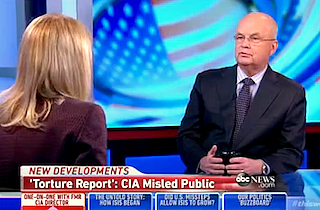 The rhetorical backflips begun by former Vice President Dick Cheney on Meet the Press Sunday morning were continued by former CIA Director Michael Hayden on This Week, as host Martha Raddatz tried to get Hayden — who’s implicated in the Senate Intelligence Committee’s report on the CIA’s enhanced interrogation techniques under the Bush administration — to admit whether he supported what was described in the report.

“Do I support [enhanced interrogation techniques]?” Hayden wondered, distinguishing between the legal definition of torture and the “boarder national consciousness.” “With regard to waterboarding, I made clear that I thank god I didn’t have to make that decision.”

“So that’s a way to not say I fully support or not support [them],” Raddatz countered.

Hayden then pulled the old terror attack what-if, a favorite of the program’s supporters, in which he wondered what if we hadn’t tortured and there had been another 9/11-style attack on the United States — an argument somewhat enervated by the report’s conclusion that torture was ineffective at procuring actionable intelligence from detainees.