Michael Moore: A ‘Certain News Channel’ Encouraged People To Commit Acts Of Violence Against Me 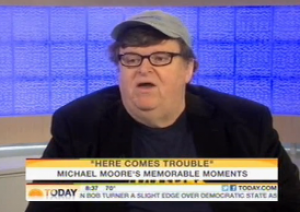 On the Today show to discuss his new memoir, Here Comes Trouble, Michael Moore maintained that he would not take back his controversial 2003 Oscar speech, but holds certain regrets for the toll it has on him and his family.

Moore left jaws dropped in the days immediately following America’s entry into Iraq when he used his Oscar acceptance to speak out against the “fictitious times” with “fictitious election results,” “fictitious presidents,” and “fictitious wars.” Over the audience’s boos, he unforgettably cried: “We are against this war, Mr. Bush. Shame on you!”

Savannah Guthrie made reference to the provocative moment, suggesting that he “seems to come very close to offering regret for saying that” in his book.

“Not at all, actually,” Moore quickly rejoined. Time has redeemed him, he says, “as years went on, and people realized what [he] said was accurate and true.” What he does, however, regret, is the toll his fiery habits have taken on his family:

“If I have any regret, it’s what it put me and my family through as a result of the amount of hatred that was generated on a certain news channel and on AM hate radio. They daily encouraged people to essentially commit acts of violence against me.”

There are stabs there, aimed presumably at Fox News, and specifically at Glenn Beck, who once thought out loud and on-air about killing him. But he points out that in his book he documents a half-a-dozen other threats he’s received, including “a very significant one that resulted in a prison term for an individual who was planning to blow up my house.” The impending danger, he insists, is “not really a feeling.”

He ends by saying, “I don’t understand, I make documentary films. You don’t really think that that’s the result of — it was just a little difficult.” Which may come off as naive; or, as has been suggested by Andrew Breitbart‘s right-leaning Big Hollywood, an attempt at victimhood. Either being the case, and as real as the regret probably is, Moore knows the weight of their words and work better than anyone; the risk is probably worth it.