He Said/She Said: The Mystery Of CBS And Michael Moore’s Booking

He Said/She Said: The Mystery Of CBS And Michael Moore’s Booking 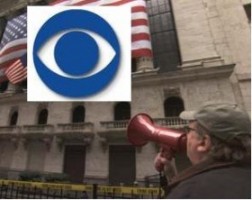 The he-said she-said wars between Michael Moore and CBS continue, thanks to an email that appeared in my inbox last night from someone who would prefer not to be identified. Let’s go with “someone with knowledge of the situation who is not from CBS.”

It was a schedule for Moore on September 28, 2009 — i.e. yesterday, when he alleges he was supposed to have been on the CBS Early Show. You will recall that CBS said that Moore was not booked on the show. This schedule, dated September 24th, is meant to indicate otherwise (and actually firms up the initial position taken by the Overture rep, who had characterized the CBS bookers as having “definitely been in discussion with us to have him on the show” but not actually confirmed). The date on the schedule is September 24, 2009 — a day after the implicated episode of GMA aired, and a day before Overture claimed to have been told of CBS’ decision. If this document is valid, it indicates an understanding of a booking, at the very least.

That is a big if. A caveat: I have not verified it. The document file sent to me was called “Michael Moore – Master Publicity Schedule.pdf” but that means nothing. It could have been typed up by a monkey and emailed by a ferret, and I would not know the difference. See below, on Overture Films letterhead: 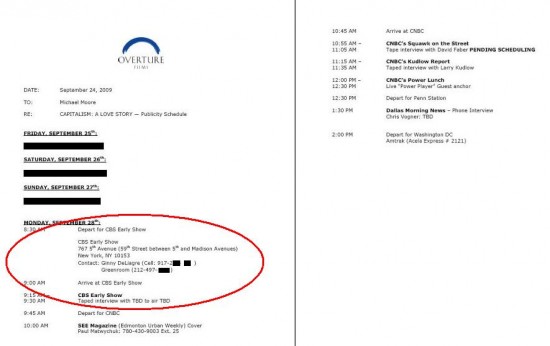 I have blocked out the phone numbers for Ginny DeLiagre, the CBS contact listed, but I verified that the number was indeed hers, calling this morning and speaking to her briefly. My request for comment was deferred to CBS spokesperson Kelli Halyard, with whom I had spoken on Sunday.

Here’s what it was upgraded to, after four hours, and multiple phone calls with multiple people:

“Michael Moore was never booked on the Early Show. His publicist called to pitch us and we declined. As always, we salute Mr. Moore’s ability to produce publicity.”

Here’s what I asked for that was not provided: Ginny DeLiagre’s title. Was she a booker or a producer? I was told this morning that they’d get back to me. Three hours later, I was told they’d have it to me in an hour. At an hour, I asked if it was coming. I was told that they didn’t have anything to add. So I asked Google. It appears that Ginny DeLiagre is a producer. Congratulations on that Emmy nomination!

I also asked for clarification about this part: “His publicist called to pitch us and we declined.” That’s different than “definitely been in discussion with us to have him on the show.” So — had there been ongoing discussions? Alas, there was no comment.

So does this prove anything? Sure — it proves that someone at some point typed up a schedule showing Michael Moore having an appointment at the CBS Early Show. That doesn’t make it fact, or at least not one I have been able to independently verify. My job here was to take the evidence provided and try to verify it. For such a small, trivial matter it’s amazing how freaking hard that’s been. The next best step is to present as much information as I can about that which I cannot verify. Having help in that is useful, of course.

So, you can draw your own conclusions based on the information provided. Which is:

Draw your own conclusions. I may or may not be totally sick of this story.