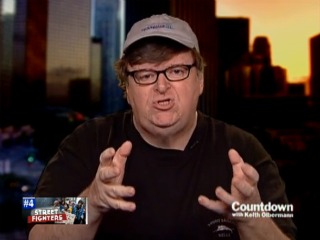 Filmmaker Michael Moore visited Keith Olbermann‘s Current TV show to discuss the “Occupy Wall Street” protest currently unfolding in lower Manhattan. The protest, for those unfamiliar with it, was organized as a “leaderless resistance movement” by Adbusters magazine.

The goal, as it currently stands, is to set up camp on and around Wall Street for two whole months and repeat one simple demand… to be decided by those participating. Music and culture website Death and Taxes, bemoaning the lack of mainstream media attention being given to the protests, summarizes its general goals thusly: “The Occupy Wall Street protesters, on the other hand, have ideas and are intent on highlighting the mechanisms at work within the perpetual boom/bust cycle that is the American economy and democracy. One of their main messages would appeal to many hundreds of million of viewers: That the wealthiest 1% of Americans own 40% of this country’s wealth and that the other 99% of fighting for the scraps.”

The movement currently boasts its own website and Facebook page to facilitate other like-minded protests all over the world.

Moore told Olbermann that he has high hopes that more and more people will join in:

This is really the very first, down on Wall Street in the Financial District, the very first attempt since the crash of ’08, to take a real stand and it’s been powerful. And I gotta believe that even though it may number in the hundreds right now, this is gonna grow. Not only on Wall Street, but in communities all over America.

He then encouraged Americans who find themselves far from New York to consider protesting at local bank branches using “possibly even civil disobedience.” He also reserved some harsh words for the big banks themselves:

Moore then quoted New York mayor Michael Bloomberg as saying that there will be “rioting in the street” if things don’t change and more jobs aren’t provided soon.

Olbermann followed up with a question: “The pretext of the left-wing media,” he said, “exists to amass the kind of right-wing media belligerence — I wouldn’t use the term bias, but it’s belligerently right wing. Assuming that’s not going to change, what do the protesters in this group…what do they need to change, modify, improve to make the system bend to their will?”

One of several suggestions Moore had was for those who have been foreclosed on to remain in their homes since, given the way individual mortgages were split and bundled into derivatives, “nobody really owns your mortgage.”

Have a look at the segment, from Current TV: