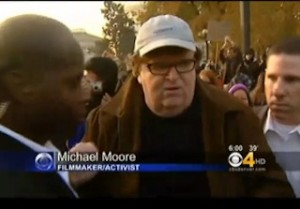 Just days after being confronted by a conservative blogger over his supposed net worth, filmmaker Michael Moore took similar questions from a local CBS reporter at the Occupy Denver protest, with markedly different results. Rather than ignore CBS-4 reporter Evrod Cassimy, Moore engaged him. When Cassimy brought up Moore’s “rumored” $50 million net worth, though, Moore called him “punk media,”  pulled him close, and growled, “You lie!”

The confrontation made for much better video than the previous one, and Moore initially handled the reporter’s questions well, admitting, ““I do very well,” and adding, “Because I do well, I want taxes raised on people who do well, including mine.”

When Cassimy pressed Moore about his specific net worth, however, Moore became visibly angry. He told the reporter, “I don’t have $50 million,” and Cassimy gave Moore an opening, saying, “That’s what it’s rumored you are worth.”

“Well, really” Moore said, “Is that what you do is sell rumors?”

“We’re asking you for the truth,” Cassimy replied.

Moore then put his hand on the reporter’s shoulder, shaking him as he said, “You’re just punk media is all you are.”

Mr. Cassimy left himself open for Moore’s criticism by citing “rumors,” rather than “reports,” but Michael Moore really ought to do better at engaging this question. He’s got compelling answers, and even though the premise itself is silly, confronting it head on is a surer way to gain converts than scenes like this, which make it appear as though critics of Moore’s wealth have got his number.

There are lots of mega-bucks celebrities who have shown up to support the Occupy protests, and recent polls show that most millionaires support raising taxes on millionaires. You can, apparently, be rich and believe in fairness, simultaneously. Moore can, and does, also argue that he takes his earnings and puts them back into making more films. His wealth, then, is a tool to combat wealth inequality.