Michael Moore On Countdown: “We Owe A Debt” To Julian Assange 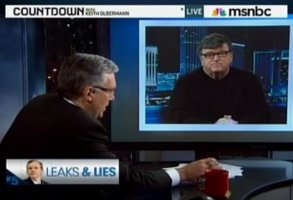 Divisive documentarian Michael Moore is in the news once again, this time for helping post bail for WikiLeaks editor Julian Assange, as well as offering up his server space to allow the whistle-blower to continue operations. Moore explained why he’s doing this on his website earlier today, and tonight reiterated his reasoning to Keith Olbermann on Countdown.

Moore, as always, was full of provocative statements, such as, “An instrument like WikiLeaks is vital for a free and open society to exist;” that supporters of WikiLeaks are “committing an act of patriotism;” that “we owe a debt to Mr. Assange;” and especially, “It’s not the leaks that are killing anyone. It’s the secrets,” not to mention his belief that Assange’s leaks would save lives.

He added that pressure must be kept on world leaders, and that an operation such as WikiLeaks is consistent with the principles of the Founding Fathers, who “knew that power corrupted.” The ways in which Moore illustrated the misdeeds of such leaders will be unsurprising to anyone familiar with Moore. There was plenty of Iraq War talk:

Moore’s potential pitfall here was simply how easy it was to predict that he’d talk about it. Even if the points he made were good ones – and re: the Iraq invasion, a majority seems to take Moore’s side these days – he risks being tuned out if he constantly talks of one cause, no matter how worthy it may be.

Moore also posited another question: “What if WikiLeaks existed” before 9/11, and released the memo about bin Laden being determined to strike inside the United States? It’s an interesting question, but his problem is this: 9/11 references are always a slippery slope. Just as Jon Stewart mocked Republican congressmen for using 9/11 for political gain, then voting against the first responders bill, it’s just as easy for Moore’s detractors to say he’s simply using 9/11 for his cause.

Moore also dismissed the sexual assault accusations against Assange: “This is all a bunch of hooey, as far as I’m concerned,” and said “there is a lot more to come” from WikiLeaks, a fact that it is, in his mind, “a good thing.” Certainly, no one can accuse Moore of not holding strong to his beliefs – or that he can’t create some compelling television. Video of the segment, via MSNBC, below: