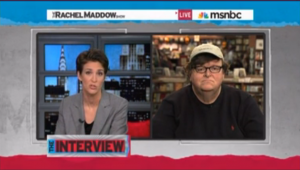 Michael Moore — fast-becoming the poster celebrity for the Occupy Wall Street movement — paid a visit to Rachel Maddow‘s program Thursday evening to discuss, among other issues, the recent outbursts of violence coming in, most notably, from the Oakland faction of the protests.

Maddow asked the filmmaker whether there has been some “splitting” within the movement, pointing to the Oakland violence occurring during the wee hours of the morning.

Well, yes and no. Everyone I’ve spoken to is committed one hundred percent to non-violence, that this is the only way that this is going to work. In fact, we don’t need violence because we’re not in the minority here. This is the majority; this is a majority movement. If this country is of, by and for the people, if it’s run by the will of the majority, there’s no need for violence because the majority have already said “We’re sick and tired of this and we expect some changes.”

I think in Oakland there’s a very specific… In terms of violence there, Oakland has a long history of police abuse, of how the black community has been treated. They’ve just had one of the worst… I mean, literally, it’s almost in the DNA of how Oakland is structured in terms of their City Hall and their police. And it doesn’t seem to matter who the mayor is, they just can’t deal with this basic problem. So I think that has a lot to do with it.

But you’re also going to have groups that come in wanting to co-opt this movement, whether it’s slick politicians that want the endorsement of what they think is a “liberal Tea Party,” or anarchists and others who don’t like the non-violence approach and want some form of violence.

So, about that last paragraph.. Ever think you’d see Michael Moore and Bill O’Reilly basically say the same thing on the same night?

RELATED: Bill O’Reilly: The OWS Movement Has Been Hijacked By Extremists, More Violence Is On The Way