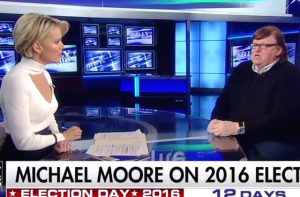 Michael Moore sat down with Megyn Kelly tonight and expressed his amusement with how Donald Trump and Donald Trump Jr. have both been touting a clip from his pro-Hillary Clinton film with a deceptively-edited clip.

A clip from his new film Michael Moore in Trumpland features the documentarian telling an audience that white working-class people have been screwed around so long by the establishment that voting for Trump will be so cathartic for them that they will be able to say “fuck you” to the elites and blow the system up.

Moore told Kelly that this was not meant as a positive.

I probably don't agree with him on a lot but Michael Moore gets this one right 100% Listen & RT: Why Trump will win: https://t.co/7uFTeUlxKN

Moore wasn’t complaining to Kelly about the edited clip they tweeted. On the contrary, he was thrilled about them driving people to check out the rest of the movie.

But more seriously, he warned that while people rightly believe the system has failed, Trump “is not the solution to this.”

Moore defended Clinton as a change agent to a skeptical Kelly and said he genuinely doesn’t care about the WikiLeaks releases.

He also said that Trump is working a giant con (tweeting about his movie being evidence of that) and that by the time working people realize he’s not looking out for their best interests, it’ll be too late.