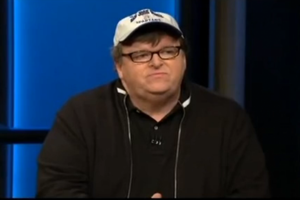 One of the Old Guard has begun to change his tune: Michael Moore is calling for a moratorium on blaming President Bush. Well, sort of. On last night’s Real Time, Moore told his co-panelists and host Bill Maher that blaming the Bush administration for America’s problems will not make them go away, nor, two years later, is it a valuable excuse.

Debating the pitfalls of the Clinton administration (which Maher argued turned the Democrats into “a second corporatist party” during Clinton’s second term), Moore made the point that he strongly believed a similar turn during Obama’s possible second term would be extremely destructive to the party. In response, Rep. Joe Sestak, who was on the panel, mentioned the damage done under the Bush administration. Moore refused to accept that as a sufficient excuse for the delay in progress:

“No one’s forgetting the fact that this frat boy totally destroyed this country economically, our standing around the world– we all get that. But it’s two years later, and you can’t keep blaming the people who created the mess. Yes, we’ll never stop being pissed at Bush for what he did. But right now we’ve got to fix this, and you guys– the Democrats and Obama– have to be the ones that do it. If you do it– if you actually get in there and do it– you’ll have everybody behind you all the way.”

Hearing as staunch a detractor of the Bush administration sound the horn for moving on from the first eight years of the century is a new development on the left, and perhaps in part due to passing the halfway point of the midterm elections. It will be interesting to see how many public figures on the left adopt Moore’s suggestions.

The video from HBO‘s Real Time below: