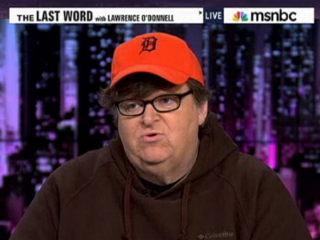 With the Occupy Wall Street protests nearly coming to a head this weekend as police attempted, then reneged on a plan to clean up Zuccotti Park, filmmaker and protest supporter Michael Moore visited Lawrence O’Donnell last night to discuss the progress of the protests and their increasingly more coherent demands. Moore, who, by the way, has a book to sell, reminded the audience that the 1% “didn’t get to own most of the nation’s wealth by being stupid,” and that the protesters at this point would only be satisfied to see “a perp walk.”

O’Donnell and Moore initially began discussing the matter of the clean-up; Zuccotti Park is private property, after all, and its corporate owner is none too happy with the mess the makeshift protest settlement has made in their land. That said, the Mayor had said the protesters would be allowed to stay indefinitely, which Moore attributed to fear. “Mayor Bloomberg… realized that they would be giving this protest the best headlines of the month if they were to [kick the protesters out],” Moore explained, quoting a protester that had described the Mayor as “afraid of YouTube.” “They did the right thing because they have no other choice,” he concluded.

As for the protesters’ plans, Moore, who identifies as one, told O’Donnell “we are there until we get justice,” which is a lofty if not difficult to define goal. For Moore, the concrete manifestation of such a goal would be a “perp walk” for the bankers that tanked the economy and “flushed the American dream down the toilet,” and the silencing of voices that blamed the lower classes for the bailout (Herman Cain got his fair share of time in this segment).