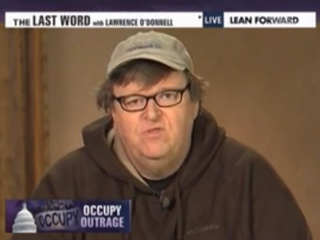 With the Occupy movement having left Wall Street definitively this weekend after footage surfaced of students at UC Davis being pepper-sprayed en masse, its most vocal unofficial spokespeople have taken to the airwaves to praise the students for their efforts. Not to be left behind is Michael Moore, who spoke to Lawrence O’Donnell today and one of the students attacked, Kase Wheatley, telling the latter that the image of him and his colleagues being pepper sprayed would be received by the world the same way the images of Tiananmen Square were.

Moore’s first statement on air was an apology to Wheatley for what had happened to him. “Campus police have turned into armies that have been militarized,” he argued, noting the small size of the protest group– eleven students– and declaring, “the images have resonated around the world in the same way the lone man standing in front of the tanks at Tiananmen Square resonated.” “It is an iconic movement in Occupy Wall Street history,” he continued, “people will remember months and year from now that UC Davis was the moment Occupy Wall Street went to college campuses.”

O’Donnell turned then after the break back to Wheatley to discuss the leadership of his college, and what he hoped to see happen in the future. Wheatley called for the resignation of Chancellor Linda Katehi and for “everyone in this system [to be] democratically elected” such that they could be held accountable to the students paying tuition. Moore agreed, adding that the decision to attack the students was “absolutely disgusting and appalling,” particularly as the police had “not arrested a single banker, a single loan shark, a single health care executive… people who stole the futures of young people like Kase, people who have rigged the system of student loans.”

As for comments from Republicans against the protesters– particularly Newt Gingrich‘s demand at last Saturday’s Republican debate that the protesters “take a bath”– Moore joked, “they were literally bathing them– with pepper spray!”

The interview with Moore and Wheatley via MSNBC below: