Michael Moore Warns: OWS Is Not Concerned With Candidates Or Voting To Make Change 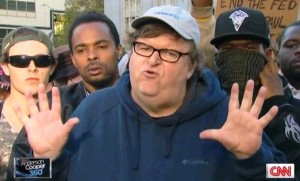 On Anderson Cooper‘s show tonight, documentarian Michael Moore declared that “the wind and the snow is not going to stop the collective anger” of the Occupy Wall Street protestors, and they would continue to speak out against the financial industry into the winter season. If anything, the cold weather will only strengthen their resolve, he claimed.

Moore expressed hope that the sheer numbers of the movement would outweigh the influence of several hundred billionaires with more combined wealth than half of the country. However, what Cooper wanted to know was whether Occupy Wall Street would take the same steps the Tea Party did and actually become a potent political force in upcoming elections.

“This movement is so beyond just, hey, let’s get behind this candidate, get them elected to office. Those days are over. You know, we’ve all worked for candidates. We’ve all voted. We’ve all participated. And what have we gotten out of it? We’ve all written to our Congressmen and women, please pass House bill number 3428. What did we get? Where are we? We’re in the worst shape we have been in this country that I’ve ever seen in my lifetime. And, and so, this movement is not right now concerned with candidates or specific bills in Congress.”

Moore also responded to Peter Schiff‘s comments that big government was more to blame than capitalism for the financial crisis, explaining that “the congressmen and the senators are the employees of Wall Street.”