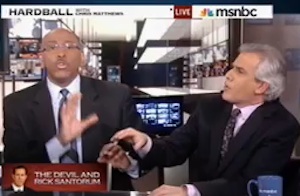 On Wednesday’s Hardball Former RNC Chief Michael Steele and Mother Jones’s David Corn got into a heated “donnybrook” — in Chris Matthew’s words– over Republican hopeful Rick Santorum‘s remarks that “Satan has his sights on the United States of America.”

“You can disagree with him all day long,” Steele opined. “I give anyone props who is willing to go out there in the context of running for office to put that — put their faith alongside of that effort…”

“But if you put your faith out there, you open yourself up to scrutiny,” Corn interjected.

“If you’re talking about running for office you can,” Corn countered.

“David, let me make my point. Iam not going to criticize you on your faith no matter what you say!”

Later on in the segment, Steele specified what he had a problem with in Corn’s evaluation of Santorum.

“The problem I have with Corn is that Corn is sitting in judgment of his faith values and saying that well therefore I get to scrutinize and say whether it’s right or wrong.”

“You are!” boomed Steele. “You’re sitting in judgment of it!”

i am saying you can evaluate them.

“Let me referee,” host Chris Matthews chimed in. “Are you questioning Rick Santorum’s right to his religious beliefs?”

“Not at all,” Corn replied.

“What are you questioning?” Matthews pressed.

“The impact on his policy view of the world and his…” Corn began.

“Where? where?” Steele repeatedly asked.

“If he says Protestant Churches are controlled by Satan that seems to me to indicate he has a certain view of protestants…” Corn responded.

“What policy, david, are you specifically addressing that to?” Steele questioned.

“How can you — how can you be president of the entire nation if you believe part of them are part of Satan…?”

Corn went on to express that Santorum can say whatever he believes but he then can be judged for saying it.

“Let me ask you this,” fired back Steele. “How do you then resolve Barack Obama sitting in Reverend Wright’s church for 20 years and hearing Black Liberation Theology and how he has applied that to his policies? How does he justify that?”

“You see it in the policies!” Steele argued.

Watch the heated segment below via MSNBC: