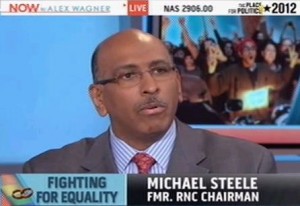 On Tuesday’s edition of Now with Alex Wagner, gay rights activist Lt. Dan Choi spoke about a federal appeals court weighing in on whether California’s voter-approved ban on same-sex marriages is unconstitutional. (The interview was done, it should be noted, before the court announced that, yes, a ban on same-sex marriage does indeed work against gay Americans’ constitutional rights).

The conversation addressed the incongruity of the Republican party embracing a certain level of liberty and of keeping the government out of people’s private lives, yet at the same time declaring that love between same-sex couples is somehow “not real” and must be declared as such by the government. Former RNC chairman Michael Steele, for one, believes laws concerning gay marriage should be discussed and decided at a local level.

Panelist John Heilemann then asked Steele what he thought about the fact that, at one point, local standards held that it was unacceptable for black men to marry white women. Steele rejected the comparison:

RELATED: Lt. Dan Choi Weighs In On Consequences For Soldier Who Spoke Out At Ron Paul Rally

First off, let’s just be very clear about a couple of things. There are a significant number of African Americans — myself included — who do not appreciate that particular equation. Ok? Because, when you walk into a room, I don’t know if you’re gay or not. But when I walk into a room, you know I’m black. And whatever racial feelings you have about African Americans, about black people, that is something that, it viscerally comes out. I don’t know until later on, maybe you tell me or some other way, so don’t sit there and make that comparison. It’s not the same.

Heilemann stuck by his comparison, noting that being gay — just like being black or being white or straight — is an immutable characteristic. “You can’t change who you love, you can’t change what color you are,” he said.