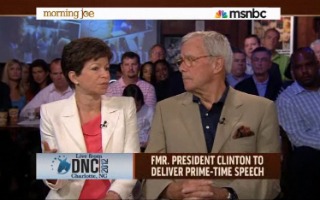 Barack Obama senior adviser Valerie Jarrett stopped by Morning Joe while in Charlotte, where she was asked about criticism that the President does not do enough to reach out across the aisle to Republicans.

“The Republicans,” she said, “made a concerted effort — I’m sure Michael Steele would attest to this — from day one, to just try to oppose everything he’s done. He has reached out. He will continue to reach out.”

“There have been those who may have, you know, stood in the doorway,” Steele conceded. “But let’s also acknowledge that the President has not been, you know, on the other side of that doorway extending his hand to someone like a Senator Coburn and others who are conservatives, I mean, who have actually gone to the table and sat down. So I think, to Mika’s point, in a second term — if that happens — this President is going to have to show that he is willing to set aside all of that and at least, if nothing else, make that frontal effort to show the American people, ‘I’m trying, they’re not.'”

“In a sense,” said Jarrett, “the Republican party keeps punishing their members who do reach out and who do work together and so I think there has to be a wake-up call to say, get back together, have an inclusive effort, do the business of our country.”

Fellow guest Tom Brokaw then turned the discussion over to a Wall Street Journal piece by Democrat Harold Ford about Simpon-Bowles.”I’m hearing more and more on both sides of the aisle the need to embrace Simpson-Bowles and revive it,” said Brokaw. “Is the President prepared to do that either in the speech this week or before the end of the term?”

“The President laid out a framework which is very similar to Simpson-Bowles,” Jarrett responded. “The problem with getting Simpson-Bowles moving forward is that the Republicans signed a pledge committing that they wouldn’t add a single penny of revenue. There isn’t an economist that we know on any side of the political spectrum that thinks that we can bring our house in order without revenue, so, of course, the framework of Simpson-Bowles makes a lot of sense and if the Republicans would be willing to embrace that, we could come to the table and get it done.”

“Why wouldn’t you just put it out there and say, you know, step up or not?” asked Brokaw.

“It’s been out there,” said Jarrett.

But the President “hasn’t embraced it,” Steele pointed out, noting that the reality that Obama has not stepped up to support his own commission “sends a message.”

Jarrett then reiterated that “if the Republicans want to come to the table and talk about Simpson-Bowles, the President is ready to do that. Absolutely.”

This prompted the question of whether the President has “some responsibility as the Commander-in-Chief to lead that effort rather than follow the Republicans.”