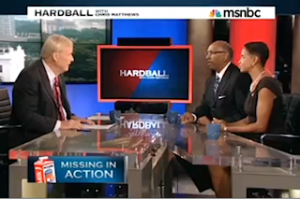 Chris Matthews opened his 7pm show Thursday evening by looking at the lack of Republican representation at yesterday’s March on Washington 50th anniversary event. Contrary to popular belief, all Republican members of Congress, including Sen. Tim Scott (R-SC), were invited to at least attend the commemoration. All declined.

“The reason the Republican Party wasn’t represented yesterday at the King reunion at the Lincoln Memorial,” Matthews said, “is that the Republican Party no more longer represents Abraham Lincoln.” For more insight on the matter, Matthews welcomed former RNC chairman Michael Steele and Rep. Donna Edwards (D-MD) to discuss how the “old segregationist” Democrats have been replaced by “Dixiecrats pretending to be Republicans.”

“Quite frankly,” Steele said, “not showing up to that event yesterday to me was abhorrent.” He described how disappointing it was for Republicans “to not be there in that moment, to look America in the eye and complete that leap, that forward progress for the American people, and to say to the African-American community, that we have made missteps in the last 50 years, but we stand here united with you in the journey forward in the life and times of Dr. King.”

Speaking about the generational shift in the GOP, Edwards said “when the party changed, blacks decided we needed to go to a place where we were welcome and where we were at home; where somebody spoke to the agenda of things that were of concern to us. And right now the Republican Party just doesn’t.”

Later in the segment, Steele did push back against the suggestion that the event’s producers did all they could to reach out to the only black member of the Senate, Tim Scott. “Yes, he was invited like every member of the United States Congress House and Senate,” Steele admitted. “But if you have the only African-American sitting in the United States Senate and you do not ask him to speak at that event, then there is something wrong.”

But he had less to say when Matthews replied with this question: “Why didn’t the the party of Lincoln ask to come?”