Michael Steele: Optics Of Holder Contempt Hearing ‘Not Good For The GOP’
video

Michael Steele: Optics Of Holder Contempt Hearing ‘Not Good For The GOP’ 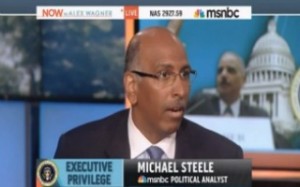 On MSNBC’s Now with Alex Wagner, former Republican National Committee Chairman Michael Steele chastised the Republican party for going forward with a contempt hearing against Attorney General Eric Holder. Steele said that the “optics” were bad for the Republican party and said that having this episode ‘devolve into the political realm’ would be detrimental to the party’s electoral hopes in November.

Wagner asked Steele what he thought of the Republican-led House Oversight Committee moving forward with contempt hearings against Holder and how that plays politically for the Republican party in an election year. Steele replied that he thought the contempt citation will hurt Republicans in the long run.

“The optics are not good for the GOP in my estimation,” said Steele. “They play actually quite well into Obama’s rant against the House and the ‘do nothing Congress.’”

He went on to say that he believes the focus of the Republicans in Congress should be on the economy and jobs and taking their eye off that ball is detrimental to the party’s electoral prospects in November.

“Here we are in the muck and mire of another Congressional investigation — to where,” asked Steele.

He made it clear that he thought the charges relating to the Fast and Furious gun walking scandal that resulted in the death of an American boarder agent were “serious.” “But to have this, sort of, devolve into the political realm and become this, sort of, hyperextended conversation that leads to what? A vote of no confidence censuring the legislative branch of the government? It just, to me, gets off track.”

Steele said that he is hearing a number of Republican office holders on Capital Hill echoing his sentiments and Republican presidential candidate Mitt Romney is “eerily silent” on the matter. Steele found Romney’s reaction politically smart.