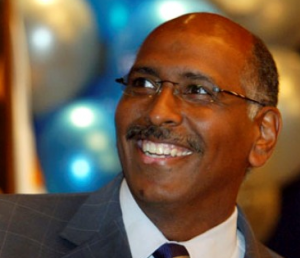 Former Republican National Committee chair Michael Steele says he won’t be a “conservative punching bag” in his new role as a political commentator on MSNBC. Or, put more bluntly, he has no intention of being the next Alan Colmes. “I think people kind of look at it and they go, ‘Oh, gee, you know, yeah, he’s the Alan Colmes,'” Steele tells The Baltimore Sun. “But I don’t think it’s that at all. I think I bring a very different style… I’m not a wallflower. I don’t hold back my views… I want to engage people.”

Steele says he’s been assured by MSNBC boss Phil Griffin that he won’t be limited, toned down or softened up:

“I have every confidence that MSNBC will treat me with the level of respect they have obviously shown by hiring me. I mean, why would you bring me on board just to say, ‘OK, this is now our conservative punching bag for the next year.’?”

“That’s not going to achieve the goals that I know Phil Griffin and the Comcast team have in mind for expanding the reach and the depth of the discussion on the network,” he explained. “It certainly doesn’t achieve my goals, to be a punching bag, because, Lord knows, after two punches, you get the joke. ‘Like I’m done. Enough already.'”

“What basically Phil has said to me is, ‘Be the Michael Steele that we have seen the last few years who has emerged with a voice in politics, who has stood atop a national committee, and has seen the politics up close and personal, but has the success of winning elections, losing elections, and knows the dynamics of what this [election] cycle will mean not just in this moment, but in future moments.'”