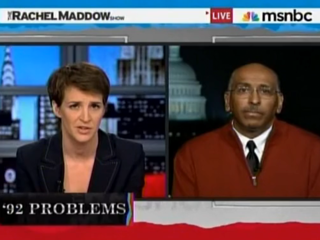 They may not agree on, well, anything, but Rachel Maddow and former RNC chairman Michael Steele are fast becoming a can’t-miss cable news duo. Steele made his second appearance on Rachel Maddow tonight to debate what Maddow considered ridiculous spending cuts and, more importantly, whether the “culture wars” have ended or are just beginning within the GOP. Steele, who has often been on the wrong side of this issue for conservatives, doesn’t quite think said wars are still ongoing.

Maddow introduced the segment with an extensive attack on the Republicans’ plan to cut spending, mocking them for wanting to cut spending on Amtrak (“War on trains! Real Americans sit in traffic!”), and noting that their attacks on moderate, libertarian social positions was alive and kicking despite people like Steele saying the “culture wars” were over. “That should not have made a ripple,” she argued.

Her introduction over, Steele playfully tsk-tsked her. “What am I going to do with you?” he joked, “I don’t even know where to begin.” He tackled the culture war issue by arguing that, while the debates are still ongoing, they occur much closer to home nowadays, keeping the issues away from the national spotlight. Maddow expressed general frustration at trying to reconcile the desire to bring social issues to the national scale with Republican, small-government ideas, once again hitting a wall because, while Steele also agreed the budget was a far more important issue, social issues take precedent in the media because they’re “sexy, juicy, fun to talk about.”

For such a hard-hitting debate, Steele and Maddow are equally fiery and have the sort of chemistry– forceful on issues but personally warm to each other– that makes for great cable news. Save a surprise contract elsewhere, it’s not a stretch to imagine MSNBC will want Steele on Maddow’s show more often than not in the future.