Michael Steele to Joan Walsh: Your Condescending Attitude Is Why Trump’s Popular
video

Michael Steele to Joan Walsh: Your Condescending Attitude Is Why Trump’s Popular 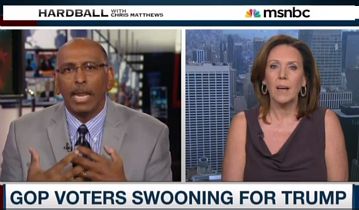 During a somewhat heated exchange on Thursday evening’s Hardball, MSNBC contributor and former RNC chairman Michael Steele told Salon editor-in-chief Joan Walsh that her condescending attitude towards possible Donald Trump supporters is the exact reason those supporters flock to the celebrity billionaire in the first place.

After reviewing a brief video of a middle-class voter focus group raving about a potential Trump presidency, Walsh said, “I look at those people and I feel sad. That is really such a low common denominator. They’re all Republicans, they’re not all going to vote for him.”

Asked by Chris Matthews to explain what she meant by “low common denominator,” Walsh elaborated, “They’re really, they really don’t have a firm grasp on reality, on what it’s going to take to solve the country’s problems.” She later exclaimed that she would be “fine” with Trump using her quotes to bash “elite” media.

“I’m not fine with it,” Steele shot back, in the clip first flagged by NewsBusters reporter Ken Shepherd. “You want to know why Trump is doing what Trump is doing and the way he’s doing it? It’s because of comments like that. Because of attitudes like that.”

And then the key back-and-forth:

STEELE: Your highbrow is looking down on my lowbrow. You are somehow better than me.

WALSH: No, I don’t think I’m better than them. No, I don’t. But they’re not thinking; they want to be entertained.

STEELE: But whether you said it or not, your comments relate that way and that’s the problem. And so — when people hear that, whether it’s from the media or Republicans in the party — they go, “This guy,” as the woman said, “he’s speaking to me. I may not agree with everything he’s saying, but he’s one of us. He’s a billionaire, but he’s one of us.”

Your comment, Joan, does not come off as, you’re one of us. And as long as they hear that, they’re not going to blame him.

WALSH: I’m so much more one of them than he is. I was not born to wealth, for God’s sake, Michael Steele.