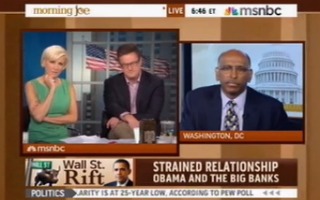 The New York Times‘ Nicholas Confessore visited the set of Morning Joe on Wednesday to talk about his upcoming NYT Magazine piece, wherein the writes that President Barack Obama “had already traveled to this city [New York City] around 20 times during his first term, but he wasn’t collecting money from Wall Street the way he used to.” This, in turn, caused some bankers to believe that the “administration’s strategy was to talk tough in public and play damage control in private and they were sick of playing along,” adding that they were essentially being “scapegoated for the recession.”

“I’m sure they’ve kissed and made up,” joked host Joe Scarborough.

“It’s amazing,” replied Confessore. “I’m not sure i can think of a comparable swing of a kind of a constituency group or, you know, a certain community of players and fundraisers who have flipped so hard from love to hate in four years.”

“isn’t that amazing? because you try to explain this to people outside of new york, who think, oh, wall street is going to be republican. but for a lot of cultural reasons, those guys and women down on wall street feel more culturally connected with democrats than republicans.”

I think Mitt Romney benefits from the fact that they now have someplace to go. The love affair, the little tryst with Obama back in 2008 ended on a sour note. They were demagogued and demonized as the wealth-creating class, if you will, and that was somehow a bad thing. So they were like, look, you know, we’re not going to let you beat us up and take our money. So we’ll keep our money. You can beat us up all day long; we’ll get with the guy who is going to be with the program that recognizes the value that we bring to this economy. And I think that’s something that you saw yesterday, even though the emphasis was on 9/11. The money people behind the scenes were steadily working on behalf of Mitt Romney to make sure the folks on Wall Street know you have a new home to come to. This fanciful dalliance with the President is over. Let’s get back to the business of rebuilding the economy, and you’re going to be a key source of that.

Co-host Willie Geist then asked Confessore what, exactly, is at the “core” of Wall Street’s “whining” about Obama and his administration.

Confessore responded that this marks the first time in 30 years that Wall Street bankers have not been “lionized.”