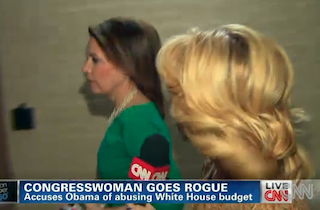 For Tuesday night’s “Keeping Them Honest” segment, CNN host Anderson Cooper turned to Dana Bash‘s encounter with Rep. Michele Bachmann who, asked about comments she made about President Obama enjoying a lavish lifestyle at the taxpayer’s expense, repeatedly dodged the questions and “literally raced away.” Bash was “speechless.”

“A new book is out talking about the perks and the excess of the $1.4-billion-a-year presidency that we’re paying for,” Bachmann said in the speech. “And this is a lifestyle that is one of excess.” She added:

“Now we find out that there are five chefs on Air Force One. There are two projectionists who operate the White House movie theater. They regularly sleep at the White House in order to be readily available in case the first family wants a really, really late show.”

Bash sought to confront her about those comments — which got four Pinocchios from the Washington Post — and found herself chasing after the congresswoman. “She literally raced away from our Dana Bash,” Cooper remarked.

“The claims of $1.4 billion in White House perks and excess, they fail on the facts in simple fairness,” he further noted, adding:

“Congresswoman Bachmann apparently got her information from a 131-page self-published book by a long-time Republican lobbyist. The book provides no specific sourcing for the claims it makes. No sourcing. According to the Washington Post, which dug into this, the only scholarly work on the subject was published in 2010 by the left-leaning Brookings Institution. It found the Bush White House in 2008 cost about $1.6 billion to run. Nearly $1.1 billion of which went to the Secret Service and the White House chopper fleet, not perks. If Congresswoman Bachmann is right and that’s a big if, the current occupants are actually $200 million cheaper.”

Encountering Bash, Bachmann said “the big point of my speech was about Benghazi. This was an absolute disaster.” She went on to speak about how the president didn’t care about the four Americans who died in the Benghazi attack, chiding Bash for bringing up dog walkers when there’s an issue of national security.

“But congresswoman, you’re the one who brought it up,” Bash countered. Bachmann darted away at that point.

“It does take a lot to make me speechless,” Bash told Cooper. “I was speechless.”