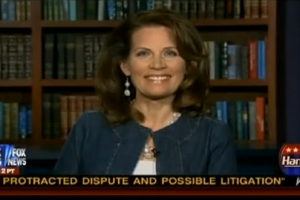 Fox News has come under fire for its vicious demonization of the Tea Party movement lately, so keeping in line with their “fair and balanced” slogan, Sean Hannity had Michele Bachmann, on the show last night to defend their cause. She replied to criticism that the right was inciting violence, attacked the Democratic financial regulation bill, and took on Net Neutrality.

Considering that Hannity was pitching her extremely loaded questions, complete with Bill Ayers references and the suggestion that the attack on conservatives is a “coordinated effort by all people on the left,” Bachmann took the middle road. There was the typical Bachmann fear of being targeted, along with “whoever they see as an effective voice,” by the Democrats. She stuck to the talking points on financial regulation being a “permanent bailout” bill that the Obama administration wants to “ram down our throats.” But she deviated just a little to speak up for the internet, attacking Net Neutrality and claiming the Democrats want to censor everything on the internet that does not serve their purposes.

When she talks issues, Bachmann proves a formidable force within the Republican party– and that’s what makes it so difficult to understand precisely what her role is in the grand conservative revival mostly lead by amazingly talented orators and tamed agenda-spewing robots. What does the organized American right do with a more accomplished, more intelligent, more beautiful but insanely unreliable version of Sarah Palin? Bachmann is calm, collected, and convincing enough of the time to keep her House seat safe, but for every respectable performance on Fox News, there’s a call to armed rebellion or paranoid shouting about how some Democrat or another wants her dead. For now it seems that they are keeping her marginalized, limiting her to preaching to the choir on Hannity or being let out in public closely leashed to Sarah Palin. And there’s no telling whether she has it in her to polish up her act enough to convince the mainstream she’s not a nutcase.