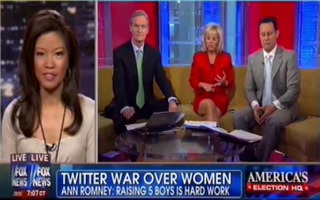 Michelle Malkin appeared on Fox & Friends on Thursday where she was was asked for her opinion on Democratic strategist Hilary Rosen‘s comments about former Massachusetts Gov. Mitt Romney‘s wife, Ann Romney. On CNN last night, Rosen said that Romney should not be taking policy advice from his wife on issues like the economy because she “has never worked a day in her life.” In response to that assertion, Malkin said that Democratic women have for nearly 20 years displayed “contempt for all conservative moms.”

RELATED: Michelle Malkin: ‘War On Women Rhetoric Has Backfired On The Progressive Left’

When asked to weigh in on Rosen’s comments, Malkin asked, smiling broadly, “a mother of five sons?”

“This is not a coincidence, by the way,” Malkin continued. “We pointed this out when this thing exploded on Twitter last night when Ann Romney joined Twitter to push back at this frontal assault. That Hilary Rosen, a career D.C. lobbyist and a woman of great elite privilege in the D.C. community, is someone who works alongside Anita Dunn — who just happens to be the former Obama communications hit woman.”

Malkin continued, saying that the “vitriol” leveled at stay-at-home moms by Rosen, and by extension the Obama campaign, “is part of the strategy of the Democrats.”

“I think it actually is bad strategy,” said co-host Brian Kilmeade. “They started winning the female vote and now they’re insulting housewives across the country.”

“Of course, it is. But these leftist women cannot help themselves,” said Malkin. “This is a page from an old playbook. Hillary Clinton did it when she went after stay-at-home moms when they bake cookies and have tea. This happened in 2004 when Teresa Heinz Kerry disparaged Laura Bush and said that she had never had a, quote unquote, real job in her life. Although Laura Bush had worked both as a teacher and a librarian. And now you have Hillary Rosen echoing Hillary Clinton – these people don’t just have contempt for conservative, stay-at-home moms, they have contempt for all conservative moms. And, yes, it is going to backfire.”

“There are some stay-at-home moms who might vote Democrat too,” said co-host Gretchen Carlson. “That’s what is being missed in this entire discussion.” Carlson asked Malkin if she believed that Rosen got “marching orders” from the Obama administration on this because Obama campaign manager Jim Messina and campaign advisor David Axelrod both came out against Rosen’s statement nearly immediately on Twitter.

“I think that what these people have not expected, the White House and the Obama administration, is that the right and conservative activists on the line would push back the way we did,” said Malkin. “Thank goodness we have.”