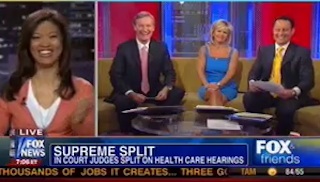 Michelle Malkin stopped by Fox and Friends on Thursday morning and spoke with the panel about how US Solicitor General Donald B. Verrilli, Jr‘s Supreme Court arguments were so disastrous, the other justices seemed to have to help him out.

“You know what I was amazed at is sometimes as you listen back to the recordings, it seems like some of the justices are helping the Solicitor General!” co-host Brian Kilmeade observed. “Here’s an example — here’s the justice saying this is really what you should have told me!”

Kilmeade played for Malkin a clip of Justice Ginsburg seemingly helping out Verrilli.

“Mr. Verrilli, I thought that your main point is that, unlike food or any other market, when you made the choice not to buy insurance, even though you have every intent in the world to self-insure, to save for it, when disaster strikes, you may not have the money,” Ginsburg interjected during second day of oral questioning.

“She’s like a stage mother on Toddlers and Tiaras!” Malkin snarked.”Ya shouda done this!”

“Sonia Sotomoyor at one point was begging, essentially, Verrilli to come up with why this wasn’t a limiting principal to the individual mandate, why this is isn’t just a lone example of a time in which the mandate would stand, this wouldn’t be a series of events that follow” Kilmeade explained further. “She didn’t get an answer!”

“Yeah, that’s right,” Malkin concurred. “And then, of course, on top of all that, there were a lot of nonlegal expert observers who are still questioning the whole fact that Elena Kagan who should have been recused from this entire exercise shouldn’t be sitting on the court as well!”

Watch Malkin’s analysis of the Supreme Court proceedings below via Fox News: