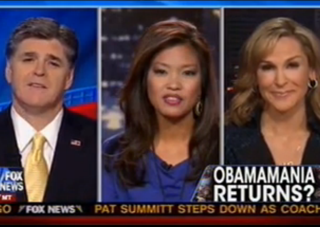 After his interview with Mitt Romney on the economy and dog politics, Sean Hannity dedicated a segment today to his theory that First Lady Michelle Obama is making subconscious connections between her husband and Jesus. In a segment where Hannity read out a segment of the Bible that reminded him of the First Lady’s words, panelist Michelle Malkin took the opportunity to give Romney some campaign advice: stop calling President Obama a “nice guy.”

“Is this the same Obama that was supposed to slow the rise of the oceans and heal the planet?” Hannity asked facetiously. Malkin replied in kind. “It won’t be long under the slavering sycophants in the drool bucket media bring back the halo.. every campaign picture of Obama in the campaign 2008 he was permanently enshrined in this glow– ‘Glowbama.'” “Michelle Obama could tell all the amazing stories that she wants,” Malkin concluded, “but she is not going to be able to rewrite the sordid history of the last four years.”

Hannity then turned to his other panelist, Tamara Holder, talking about the debt problems and the economy and asking, “Do you think this deserves comparisons to Jesus?” “That’s a little bit of a stretch in your own right… the average person does not really understand that this enormous debt you continue to talk about,” she replied, before being interrupted with Hannity arguing that it is not a stretch. He then turned once again to Malkin, who objected to Holder arguing that “the average person doesn’t understand.” “The average person isn’t so excited about Mitt Romney,” Holder replied. Hannity interrupted to toss the ball back to Malkin, who had some advice to Romney:

“[The claim]] that somehow Obama is more likable than any Republicans, and somehow he is a nice guy– I hate hearing this from Mitt Romney, he’s got to get this talking point out of his mouth. Barack Obama is not a nice guy. He has dealed [sic] brutally with the right– with people like Paul Ryan and brave Republicans that have been calling him to the carpet on this disgusting culture of corruption.”

Hannity concluded asking Holder to point out one segment of the country that has benefited from the President. Holder argued that unemployment was down, but was swiftly cut off. “I don’t understand why you have me on the show, and you don’t have to like what I say, but you’re fine with Michelle and everybody talking their conservative flowery talking points but you don’t let me finish what I want.” “You can get emotional as you want,” Hannity retorted, and as Holder continued to try to talk, Malkin feigned pain in her ears from someone else’s yelling.