Michelle Malkin: People Realizing Obama Is Pandering To ‘Kind Of People Who Boo When You Say God’ 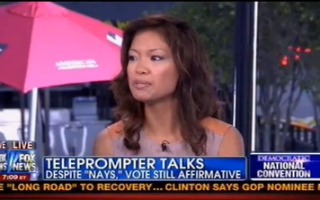 Michelle Malkin paid a visit to Fox & Friends down in Charlotte, where she said some thoughts about the Democratic Convention, including the party’s contentious vote regarding the use of “God” in its platform.

Malkin thought the initial removal of the word “God” from the party’s platform wasn’t exactly a good way of “mainstreaming itself.”

“Well, I’ll tell you this much,” she shared. “I think that for the last four years, this President has been dictating not by a Clintonesque moderation in the White House. You look at the kind of strategist, the people whispering in his ear and it’s radical extremists like Valerie Jarrett. And finally, after four years, this is dawning on people that it’s not merely a merit of pragmatic politics, but listening to and indulging and pandering to the kind of people who boo when you say ‘God!'”

As for VP Joe Biden‘s upcoming speech, Malkin laughed and noted that “the comedy gold is glistening.”

Host Steve Doocy then drew attention to a new poll indicating that 38% of respondents would describe Biden negatively, with only 23% having describing him positively. Contrast that, he said, to Paul Ryan: “35% negative, 37 positive. That’s good for him. And only 28% neutral. It looks like in the battle of the veeps, Ryan wins.”

“‘Unserious’ is another word I’d use,” said Malkin. “Pandering. And I think the ways in which this man has tried to ridiculously cast himself as identifying with the middle class, when he is one of the worst beltway barnicles in that swamp and benefited mightily from it.”