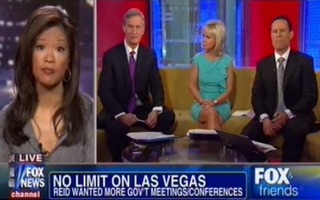 Conservative columnist Michelle Malkin appeared on Fox & Friends Thursday, where she challenged many of the presumptions that are the basis for what some, including members of the Obama administration, decry as a gender gap in wages. Malkin said that the wage gap was based on “myths” and “it’s not just discrimination against women that explains the wage gap.”

Co-host Steve Doocy asked Malkin about the Obama reelection team’s apparent focus on female voters, which he believes will help carry him over the top in November. “He apparently needs the woman vote to win again. He got it substantially last time,” said Doocy. “Yet, here on National Equal Pay Day, we know now that the White House actually pays men 18 percent than women. What’s that about?”

“Now that this artificial, manufactured holiday has come up, I think it underscores some of the persistent feminist myths about this so-called wage gap,” said Malkin. “A lot of these feminists and the White House, which as we’ve noted has this do as we say not as we do mentality about these kind of policies, always ignores the fact that it’s not just discrimination against women that explains the wage gap.”

“There are things like – I don’t know – free will,” Malkin continued. “The kind of choices that women make on their own with regard to the kind of industries they chose to go in; men and women just tend to gravitate towards different industries. They have different priorities; the way they arrange their family. And it doesn’t always come down to sexism. It’s not just a gender thing; sometimes it a freedom thing.”