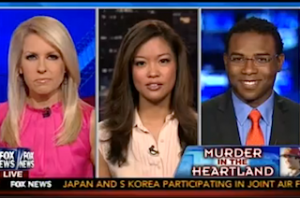 Filling in for Sean Hannity Wednesday night, Fox’s Monica Crowley hosted a lively debate between radio host Richard Fowler and contributor Michelle Malkin over the tragic shooting of Australian Chris Lane by three Oklahoma teens. Crowley and Malkin joined forces against Fowler, accusing him of “transferring the responsibility” from the alleged murderers to the guns.

Crowley began by accusing Fowler of doing something “a lot of leftists do” in an earlier appearance on Fox. “You transferred the responsibility of the perpetrators and their personal criminal behavior to some big amorphous social issue, in this case gun control.” She told him, “that’s called a deflection and we’re calling you on that.”

Fowler argued that “the one thing that connects the Trayvon Martin case and this case is the whole idea of gun violence. “If you can take the gun out of the violence and create real gun safety laws, we’ll solve this problem.” When Crowley said the three teens could just have easily beat Lane to death, Fowler replied, “There’s a big threshold between beating somebody to death versus shooting them with one bullet.”

When it was Malkin’s turn to step in, she dismissed Fowler as “very earnest” but continued to say “I’ve encountered a lot of dim bulb arguments in my life and this is about as low a wattage as I’ve ever encountered. What gun laws in particular do you think would have saved this man’s life?”

“Your question is a farce,” Fowler shot back, countering with a question of his own: “Why do 16-year-olds and 17-year-olds have a gun to begin with?”

Saying it’s already “illegal” for teenagers to own guns, Malkin argued, “instead of talking about gun control, which, by the way, you really mean gun confiscation, let’s be honest that you want to deflect from talking about the real issue here.” She said “it’s not gun control, but gang control, behavioral control and impulse control.”

“What I’m saying is if you go to a gun show and buy up enough weapons to blow up the Taliban, there’s a problem,” Fowler said, when he was able to get a full sentence out. “When kids can buy these weapons, we have a serious problem.”