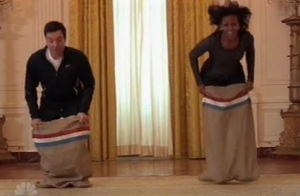 First Lady Michelle Obama made a guest appearance on Tuesday’s Late Night With Jimmy Fallon, in a pre-taped segment that had her taking on host Jimmy Fallon in a series of challenges at the White House. The two went at it in the playground classics — dodgeball, push-ups, hula hooping, and tug-of-war. Fallon and the First Lady were all tied up going into the final event — the potato sack race (the results of which we will not spoil for you here).

The challenge came about, according to Fallon, when he saw a clip of Mrs. Obama promoting her “Let’s Move” initiative, saying she’s “willing to make a complete fool out of myself,” to get the country’s kids moving. “And we can’t tell them to run around outside while we’re lying on the couch watching TV.”

Fallon said he took issue with the second part of her statement, noting that while exercise was important, it was also important to be back on the couch by 12:37 to watch his show. “Kids should not be exercising at 12:37 in the morning!” Fallon added.

So he decided to go to Washington to help the First Lady raise awareness for “Let’s Move.” After a few jokes, the two went at it — tossing around dodgeballs in a fancy room of the President’s residence and engaging in a pretty serious staring contest as the duo hula-hooped.

Who won? Watch a clip of the great potato sack race below, courtesy of NBC, to find out: