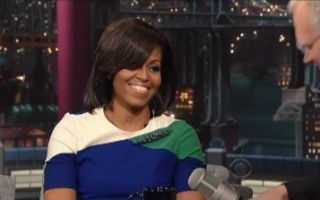 First Lady Michelle Obama made her first visit to the Late Show Monday night, where she chatted with host David Letterman about whether her husband ever sidles up to her and whispers, “Oh, that Jon Boehner. What an idiot!”

“It has never happened,” she said, after a laugh. “Never, never. He is always upbeat, particularly about Congress.” Takin’ that as a “yes.”

Later, after Mrs. Obama described how Bo — the First Dog — lets people know that when he needs to go out, to put it delicately, he places his paw on someone’s knee, Letterman asked, “Is this what Biden does?” We’ll take her laughter as yet another “yes.”

Later, she talked about her much-publicized “incognito” Target run, where, she said, a woman approached her as she was shopping in the detergent aisle. “Can I ask you something?” said the woman. Mrs. Obama grew nervous, thinking her cover had been blown. “Can you reach over and get me that detergent on that top shelf?”

The First Lady also gave Letterman a practical bit of parenting advice. “Have you tried being being the alpha?” she asked him. “No,” he admitted. “Do I look like an alpha?”

In the next segment, she spoke a bit about her parents and her upbringing in Chicago, sharing that she’d never known her father — who had MS — to be able to walk. “But there wasn’t anything my dad wouldn’t do for us,” she said, growing emotional. “Don’t make me cry! This isn’t Oprah.”

We also learned that one unforeseen benefit to living in the White House is the ability to have dinner together as a family almost every night, something that’d been nearly impossible before.

Have a look at two of last night’s segments below, via CBS: