Michelle Obama Did Not Want Barack to Sing ‘Amazing Grace’ 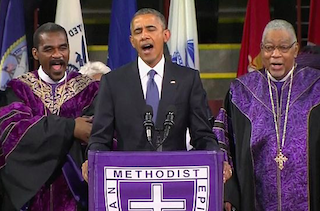 Exactly how spontaneous was President Barack Obama’s decision to end his eulogy for Reverend Clementa Pinckney by breaking out into “Amazing Grace” and leading congregants in a moving sing-a-long? According to the president’s senior adviser Valerie Jarrett, the president floated the idea en route to the funeral and, at least initially, First Lady Michelle Obama did not think it was a very good idea.

Speaking from the Aspen Institute’s Ideas Festival this week, Jarrett recounted Obama saying on Marine One, “When I get to the second part of referring to ‘Amazing Grace,’ I think I might sing.”

While Jarrett’s first response was a non-committal, “Hmm,” the first lady was a bit more blunt, asking, “Why on earth would that fit in?”

“I don’t know whether I’m going to do it, but I just wanted to warn you two that I might sing,” Obama said, according to Jarrett. “We’ll see how it feels at the time.”

When Obama arrived at that portion of his speech, he took a dramatic pause, which made Jarrett think he was deciding whether or not he would go through with it. “So later I said to him, ‘Were you thinking about whether or not to sing?’” Jarrett said. “He said, ‘Oh no, I knew I was going to sing. I was just trying to figure out which key to sing in.’”

Jarrett concluded by calling it a “powerful moment” that she will never forget.

And you can watch the president’s musical performance below, via CNN: