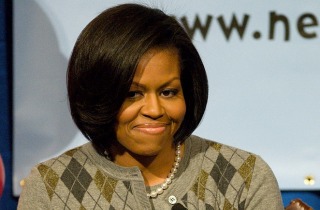 One issue Michelle Obama has been particularly passionate about is taking care of America’s veterans, and today she praised the movie American Sniper for showing such a complex portrayal of what U.S. servicemembers go through.

Now, this being a film about a man who served in the Iraq War, obviously all liberals have to hate it and all red-blooded conservatives have to love it, because what is the movie-going experience if not hopelessly partisan. So don’t be surprised if you hear some heads exploding upon hearing this news.

The First Lady participated in a panel discussion at National Geographic headquarters in D.C. today about the veterans’ initiative Got Your 6, focused on building stronger connections between civilians/Hollywood and the U.S. military. One of the panelists today was none other than Bradley Cooper, the star of American Sniper.

And Obama had some very positive things to say about the movie:

Michelle Obama praises #AmericanSniper: "The #1 movie in America now is a complex emotional depiction of a veteran." pic.twitter.com/wOvc5y6IKF