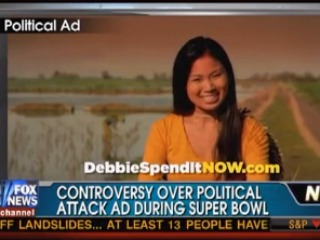 Michigan residents watching the Super Bowl last night may have noticed an unusual political ad that aired during Sunday’s game. In it, a young Chinese woman is seen riding a bike through what appears to be a rice paddy. She stops to tell the viewer all about Democratic Michigan Senator Debbie Stabenow‘s spending, as young Chinese women riding bikes through rice paddies are wont to do. As a result of spending, she informs us, the U.S. has to borrow more money from China and “your economy get very weak. Ours get very good. We take your jobs. Thank you, Debbie Spenditnow!”

The ad is for Stabenow’s rival, former congressman and current Senatorial candidate Pete Hoekstra. Hoekstra visited America Live Monday afternoon to address claims that his ad is inappropriate and plays on racially-charged stereotypes that, as one group put it, “encourage anti-Asian sentiment.”

“The only group of people that this ad is anti” Hoekstra said, “it’s anti-Debbie Stabenow, it’s anti-Barack Obama, the spending policies of the liberal left.”

“You’ll notice that the ad,” he continued, “points to the opportunities that America’s dumb economic policies — deficit spending, trillion dollars of deficits, trillions and trillions of debt — it creates the opportunities for counties like China and others to take advantage of our weakness.”

Host Megyn Kelly brought up the fact that the young woman speaks broken English. (The actress, Kelly noted, is American and the ad’s dialogue was purposefully written in poor English.)

“Well, it’s not a stereotype at all,” Hoekstra responded. “This is a, you know, through the creative, this is a young woman in China who is speaking English. That’s quite an achievement.”

So, hey. Do you think that, if Hoekstra were able to spin any faster, he’d drill right through the Earth and actually end up in China?

A common pattern I’ve noticed whenever a person or institution is hit with charges of racism is the argument that something cannot be racist unless it displays hatred. But racism exists in many forms and, more often than not, these forms are subtle. This is the great achievement of racists: To promote a sense of inferiority or wrongness or potentially dangerous otherness that is so subtle as to be pervasive, built into the very way we speak and think about one another.

And that is the case with this ad.

And the same goes for this ad.

The young woman in the ad doesn’t simply happen to be Chinese. She’s not our Chinese pal, riding up to us on her bike to gossip about Michigan politics. She’s our enemy. She’s portrayed as smug, almost taunting us. “Thanks Debbie Spenditnow!” I mean, come on. This woman is awful. She’s annoying. She rubs us the wrong way. She’s glad we’re losing our grip on our economy. And that’s intentional. It’s intentional because we need an enemy to remind us why she shouldn’t vote for Hoekstra’s rival, and it’s easiest to create an enemy that caters to the deep-set, racially-charged fears already pervasive in American history and culture.

And what concerns me most about this isn’t that it’s incredibly lazy to use racist stereotypes in an effort to play upon voters’ fears. It’s not that this ad is insulting to Michigan voters because it operates on the assumption that fear and hatred, not reason or intelligence or thoughtfulness, are what ultimately drive a person to vote. What concerns me most is that this ad is the result of one of two conversations. Either 1) every single person working on this ad is so ignorant or so firmly ensconced in his or her own privilege that not one stopped to say, “Hey, isn’t there anything, you know. Kind of off about this?”, or 2) someone thought this — knew this — and decided it didn’t matter. It didn’t matter that through this ad runs a current of ignorance, hatred and fear. It didn’t matter that not all Chinese people work in fields, or speak English well enough to discuss the U.S. current economic situation yet not quite well enough to be grammatically correct. It doesn’t matter that the Chinese are not “our enemy.”

Have at Hoekstra’s explanation, via Fox News: