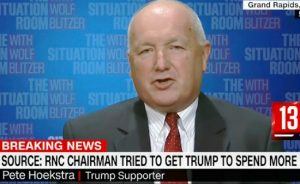 During an appearance on CNN this afternoon, former GOP Congressman Pete Hoekstra, a Donald Trump supporter, struggled to answer anchor Wolf Blitzer when asked when was the last time Trump appeared in Michigan, Hoekstra’s home state.

Discussing Trump’s interview with CNN’s Dana Bash earlier in the day, where Trump said he was leading in virtually every state and that he would invest more of his own money into the race, Blitzer wanted to know if Hoekstra believed Trump was ahead in all of the battleground states.

The ex-Michigan rep noted that Trump is trailing in some states but that the race is tightening, including in Michigan. Blitzer then wanted to know if Hoekstra knew when Trump last made an appearance in the state because he couldn’t remember. He also asked if Trump was spending money in the state.

“Ben Carson will be here on the weekend,” the Republican continued. “Donald Trump, it’s been longer — I’m trying to think because I was at the rally where he was at. So that’s probably been three — three and a half weeks since Donald Trump has been here.”

Hoekstra then went on to say Trump will make more visits to the state if he continues to dig into Clinton’s lead in the state, leading to Blitzer to highlight that the last polls he’s seen show Hillary up by double digits.

It appears Trump’s last rally in the state was in late September in Novi, MI. Real Clear Politics shows Trump down by 8.8 points in recent polls.