Mika Brzezinski Browbeats Black Pro-Trump Pastor: Is It Racist, Yes or No? 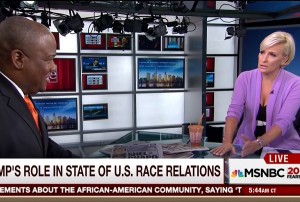 Brzezinski began by asking Pastor Burns if he thinks his candidate bears any responsibility for the climate of racial division, but then became insistent and combative when Burns didn’t answer her questions quickly enough, or to her liking:

Mika Brzezinski: when he made the comments about the judge saying he, was that racist or not? I just want to know if that is racist or not. I need to know where you stand on things in terms of reality. so, were those comments racist or not?

Pastor Mark Burns: I think it’s important to understand. I think if I was in Mr. Trump’s shoes and I had a very controversial policy that offended many millions of, potentially millions of Hispanic people…

Mika Brzezinski: You know he was born — were the comments racist or not?

Pastor Mark Burns: Let me finish my statement or not.

Mika Brzezinski: I’m asking for the answer to the question and not a statement.

Pastor Mark Burns: Let me give you my answer the way I would give it to you so we can move forward. We’re telling the story.

Mika Brzezinski: It’s yes or no.

Brzezinski probably thinks she was just being a dogged questioner, but while she was trying to confront the pastor over Trump’s racism, she came off looking like she felt entitled to talk to him any old way she pleased. When she finally eased up off of him for a second, Burns answered that he didn’t think Trump’s comments were racist, and compared them to “real racism” like the re-raising of the Confederate Flag in Charleston, South Carolina this year.

Reverend Al Sharpton then reminded Burns that Sen. Tim Scott (R-SC) had no problem identifying Trump’s comments as racist, and was in the process of asking Pastor Burns a series of questions when he was interrupted, too:

Republicans in Congress have also sought to undo a Confederate flag ban that was put in place following the murders of the Charleston Nine. Trump himself waited several weeks to weigh in on the flag, and only did so when he was asked if he agreed with the decision to take it down from the state house grounds. “I would take it down, yes. I think they should put it in a museum,” Trump said at the time, adding “Let it go. Respect whatever it is you have to respect because it was a point in time, but put it in a museum. But I would take it down, yes.”