Mika Brzezinski Clashes With Scarborough, Goes Off On Sequester: ‘Everyone Should Be Ashamed’
video

Mika Brzezinski Clashes With Scarborough, Goes Off On Sequester: ‘Everyone Should Be Ashamed’ 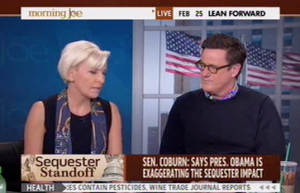 Mika Brzezinski and Joe Scarborough kicked off the week on Morning Joe with a disagreement over the sequester blame game. As Scarborough pressed his co-host on President Obama “not telling the truth” about the automatic spending cuts being his idea, Brzezinski grew frustrated that we were still arguing over the point.

When Brzezinski deemed the argument to be “silly,” Scarborough followed up by asking whether it’s “silly when a president intentionally misleads the american people about who came up with this idea at a presidential debate.” If “George Bush didn’t tell the truth to the American people,” he continued, “on something like this, even a small matter, would that be silly?”

The White House came up with the idea and everyone supported it, Brzezinski countered — and now, no one is coming up with an alternative, which was the whole intent to begin with. “Everyone should be ashamed of themselves,” she asserted.

And with that, fighting past Scarborough’s interruptions, she was off:

We are four days away from cuts that will hurt people, cuts that are maybe not the right cuts, cuts that may impact our national security, and both sides ought to figure out how to cut $85 billion without doing such drastic damage to some people’s lives immediately on Friday. And quite frankly, the president does have a plan on the table that involves chained CPI and about, I think, $400 billion in Medicare cuts. That’s better than the sequester. It is. So the Republicans ought to stop bickering over who came up with this because everyone did, to avoid it. To come up with something better. It’s silly.

At the end of the segment, Scarborough added that he purposely was pushing Brzezinski’s buttons, knowing that if he criticized the president, “you’d get really angry, and defend your man.”

“You’re the Rodney King of morning television,” Richard Haass chimed in, eliciting a “too soon” from the entire table.