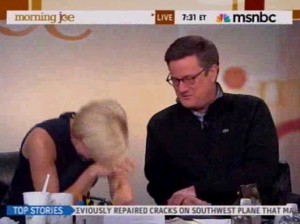 Scarborough asked Brzezinski “What’s wrong with you?” as she was bent over with laughter at the Cheney bit that Scarborough said was “mean-spirited.” She carried on laughing for a full 63 seconds during that segment (at least, according to Newsbusters, who timed Mika’s laughing jag), and started up again later in the show.

About 20 minutes after her first outburst, as they returned from a commercial break, Brzezinski was doubled over again, as the show’s producer informed Scarborough that the show was receiving angry emails on the subject. Mika appeared to want to offer an explanation, beginning, “It’s just funny TV,” but Scarborough decided to move on.

Was the bit really that funny, or that offensive? You be the judge. Here are the two clips, from MSNBC’s Morning Joe:

The bit was really just a rehash of Cheney jokes that have been kicked around more than a rented soccer ball, but there’s no accounting for taste. Brzezinski’s reaction was definitely over the top, but not worthy of angry emails, and certainly not worthy of this ultra-dramatic reaction from Newsbusters‘ Mark Finkelstein:

Are you old enough to remember the polio-era line: “funny as an iron lung”? After all, what kind of person would find funny the notion of someone fighting to breathe?

Today’s Morning Joe played a Letterman clip of a faux-promo for an imaginary TV show called “The Dick Cheney Story.” As the title song from the Mary Tyler Moore Show plays merrily in the background, we’re treated to images of Cheney wielding a gun, in a wheelchair and undergoing open-heart surgery. The clip closes with video of Cheney fighting to get a breath of air.

Really? It looks to me like Letterman looped some video of Cheney pausing for breath during an interview in order to evoke the hack Cheney-as-Darth Vader cliché. It’s not like he was being waterboarded.

I do have to give Finkelstein props for bringing up the polio era, a reference that’s only slightly less timely than Letterman’s use of The Mary Tyler Moore show as parody fodder. I hear The Late Show is now furiously trying to book Yahoo Serious, Yakov Smirnoff, and The California Raisins for next week.

The heart surgery thing wasn’t funny either, but we’re about a decade late to start being outraged about Cheney heart condition jokes. Personally, I’m not opposed to heart attack humor on principle, as long as the punchline is still around to respond. Letterman’s biggest crime here is not being funny, and Mika’s is her lack of recognition of same.