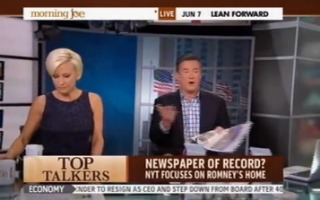 On Thursday, Morning Joe hosts Mika Brzezinski and Joe Scarborough went head to head over whether it was appropriate for the New York Times to publish “The Candidate Next Door,” an article on Republican presidential candidate Mitt Romney‘s house renovations — renovations that are, apparently, annoying his neighbors.

“This isn’t about holdings. This is about a construction project that is rankling a neighborhood, and there are things happening that are very clear in that neighborhood that might annoy some people,” said Brzezinski.

“They only interviewed his Democratic neighbors,” Scarborough told her. “How fascinating. You know what? I guess that was just a random sample.”

“Anytime someone is doing a renovation, you can go to someone’s neighborhood and find neighbors that are annoyed,” argued Romney adviser Dan Senor. “This is not a major New york times investigative piece.”

Brzezinski remained unswayed. “Joe,” she pointed out, “you said on this show, hello, you don’t build a house with a car elevator when you’re running for president in the world of the one percent versus the 99 percent. Duh. You said that. You know that. I’m not saying this is completely fair. I’m not saying your narrative or your concern isn’t necessarily true, but let’s not overlook the obvious as well. I mean, this guy is building a massive mansion on the water with a car elevator. He is shutting down the street. People are watching this. It’s going to cause a story. You know that. You’re politically savvy.”

“I was just going to say,” added panelist Mark Halperin, “to put it in a larger context of the presidential campaign, two things Republicans have been annoyed at and frustrated by for years: labor union power helping the Democrats and liberal media bias against Republican candidates. One reason they are so excited about Wisconsin is because it shows that the labor unions, they’ve got labor unions on the run to some extent in a lot of places.”

Scarborough then made the point that Republicans have grown to expect negative or biased media coverage, but that Democrats in office seem to be shocked or embittered when they’re given less than favorable coverage:

If you’re running and you’re a Republican, and Dan knows this, you just know you factor that in before hand, that the newspaper hates you, that the newspaper is hostile to you. It was my case in Pensacola. I knew every time that I ran, they would find, you know, dig up the craziest stories, write the most horrible editorial. You factor that in and you work around it.

That’s why, by the way, on a bigger scale, it’s always fascinating to me that people like President Obama and then-President Clinton, when they don’t understand that the reporters come too, Willie, right after they raise their hands. At that point, the reporters go, “oh, wait a second, we’re journalists.” And then they start hammering them and holding them accountable like they should, and then it’s not the Republicans that are shocked at that because they have been through that. But when that happens to President Obama, you know, President Obama very bitter about the media. The Clintons in ’93, ’94, ’95, ’96, they hated the media more than any Republican. It comes as a shock. And I say this to young Democrats who may be sworn in some day as the president of the United States, they’re gonna give you a few ride in the campaign. But once you get sworn in, Willie, that’s when they start acting like reporters again.

Host Willie Geist noted a strikingly similar article on John Kerry during his campaign in October of 2004, focusing on his wealth, his multiple homes, his penchant for windsurfing in Nantucket, and how his “elitism” might making him seem out of touch to voters.

“It’s all about proportionality,” said Scarborough.

But the argument wasn’t over. “Maybe if it was in the Wall Street Journal, you’d be ok with it,” Brzezinski told her co-host.

“I would actually like to buy that house,” he joked. “But I’m a Republican, so I’m not allowed to be in sunshine.”