Mika Brzezinski On Koran-Burning Apology: What If Another Country Burned American Flag? 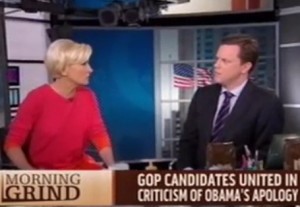 President Obama‘s decision to apologize for the accidental burning of the Koran at Bagram Air Force Base in Afghanistan continues to nourish his critics, even as protests over the burned texts continues to cost lives. On Monday’s Morning Joe, co-host Mika Brzezinski tried to put the apology in perspective, asking, if another nation inadvertently burned an American flag, “Would that not require an apology from another leader if the same scenario played out?”

Brzezinski began by calling out Rick Santorum for denouncing the apology, asking if respect for religion “only applies to his own?”

Former Bush administration official Dan Senor seemed to draw the distinction that the Koran burning was “inadvertent,” as if accidentally burning a holy text isn’t disrespectful, and thought the apology should have stopped with the commanding general. “General Allen addressed it,” Senor said. “He apologized. The problem is, was it necessary for the President to take it to a whole other level? The president apologizes, the Department of Defense, sends an acting assistant secretary to a mosque in Northern Virginia to apologize.”

“What am I missing?” Brzezinski asked, turning to co-host Willie Geist. “Because, for example, Willie, I’ll let you take it. Let’s say the American flag was inadvertently burned, would that not require an apology from another leader, if the same scenario played out?”

“No, because americans wouldn’t go in the streets and start killing people,” Geist replied. He’s right about that, too, because Americans riot for sensible reasons, like football coaches and fantastic doorbuster savings.

Geist went on to defend the President, though, on the practical grounds of protecting US servicemen. “President Obama will say and do anything he has to do to protect American and NATO forces on the ground, even if that includes apologizing, as President Bush did after an incident in 2008.”

There are important points being missed on all sides of this issue. People who are outraged at the President’s apology because nobody apologizes when our soldiers get killed need to uncouple those two things. Apologizing for doing something wrong does not equal permission to retaliate in any way someone sees fit. You can be sorry you burned Korans, while still disapproving of murder in response to Koran-burning.

On the other hand, while I understand the practical necessity of cooling tensions in a situation like this, I’ve never quite gotten on board with the explicit idea that things like this, or Abu Ghraib, or Guantanamo Bay, act as recruiting and propaganda tools for terrorists, as if, absent these incidents, there’d be a guy at al Qaeda headquarters saying, “You know, I’d love to hit ‘publish’ on this anti-American article, but it’s just not fair or accurate.”

It’s really pretty simple: if you do something wrong, you should apologize for it, not because you fear violence, but because that’s what decent people do. People rioting and killing in response to that apology is a separate issue, one that can’t be squared with an apology.