Mika Brzezinski Silences Joe Scarborough: ‘Is The Deal Done? And Did The President Win?’

Mika Brzezinski Silences Joe Scarborough: ‘Is The Deal Done? And Did The President Win?’ 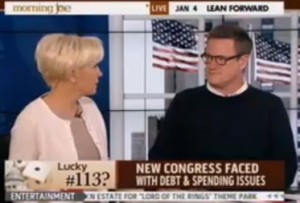 On a Friday Morning Joe that saw host Joe Scarborough and several of his panelists relentlessly trying to blame President Obama for Republican dysfunction, co-host Mika Brzezinski scored a rare, and fleeting, victory for reason. As Scarborough tried to paint Vice President Joe Biden‘s participation in the fiscal cliff deal as evidence that “the president couldn’t do it,” and that “he hasn’t been able to do it,” Mika shut him down like HAL 9000.

“Is the deal done?” she asked, to silence from Scarborough. “And did the President win?”

As Scarborough struggled to remember the words to “Daisy,” Mika replied for him, “Yes, and yes.”

Brzezinski also got an assist from former House Speaker Newt Gingrich. even if he was only trying to deflect blame from Republicans. “Presidents have huge horizons on which they can play,” Gingrich said. “They have no obligation to be the only person on the team. So if this particular president’s able to say, you know, ‘I’m gonna go give great visionary speeches, Joe, why don’t you hang out in the Capitol, solve this over the next two months,’ that would be a very rational allocation of resources on Obama’s part.”

Scarborough and guest Bob Woodward immediately jumped in to slam the President. “But it wasn’t ever really part of the grand design, was it?” Scarborough said, to which Woodward agreed, “Exactly. There’s no grand design, and its last-minute ad hoc, ‘Joe, go fix it,’ and if there was some system here where you said ‘Joe, you’re going to be in charge, start working on this,’ then you might get to a better result. But if you look at that bill in the deal, yes, there’s some good things in it, but it is no way to govern, and the world and economic players in this country are looking at Washington, and they’re gagging.”

Scarborough and Woodward also posited that the President’s problem is that he was never a governor, like Ronald Reagan and Bill Clinton were.

As hard as Mika tried, she was unable to stem the flow of garbage this morning, which even included Gingrich’s defense of the President. This isn’t about relationships, or President Obama dumping off to Joe Biden so he can make speeches, or the President not having been a governor. This is about two  things: Republicans being a hot mess who derailed their own leader’s negotiations, causing that leader to completely abandon them, whose Senate Minority Leader filibustered his own bill, and Republicans carrying out a deranged opposition to the President for four years.

As badly as Bob Woodward and the rest of the mainstream media want this to be a “both sides do it” problem, it is not. If the President has “relationship” problems with Republicans, it’s because they have spent four years questioning his very legitimacy to hold the office, in the most personally degrading terms, and conspired on the night of his inauguration to oppose every move he might make, no matter what. For Pete’s sake, the guy who led that meeting was sitting in that studio this morning. There’s a big difference between President Obama and Presidents Clinton and Reagan, all right, but it isn’t gubernatorial experience. Reagan and Clinton didn’t have to deal with a congress this deranged, this divided against itself and the executive branch. Time and again, it has been Republicans who have walked away from the President, who still keeps on trying no matter how nasty it gets. Maybe he should stop.

What Scarborough, Steele, and Woodward utterly fail to recognize is that President Obama has a very good relationship with the most important people of all: the American people, who elected him president twice. Maybe, just maybe, he’s not the problem, after all.