Mika Struck Speechless by Howard Dean’s Pro-Hillary Spin: ‘Where Are You Getting This?’ 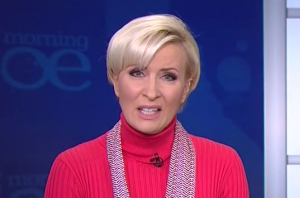 MSNBC host Mika Brzezinski and the other members of the Morning Joe panel Tuesday morning were struck speechless by former DNC chief Howard Dean‘s spinning of Hillary Clinton‘s claim that ISIS is using video of Donald Trump to recruit.

“Howard, I’m curious about the Clinton campaign’s defense of the allegations that she made in the debate about Donald Trump’s words and video of him being used by ISIS,” she asked.

But Brzezinski wasn’t having it. “But she said that video of Donald Trump is being used by ISIS to recruit. That’s not true.”

“The video of Donald Trump is all over the world, but it’s not being used by ISIS to recruit as far as anyone can confirm,” she said. “Are you saying that she was saying something that was truthful?”

“Yeah, I think so,” Dean said. “I think it’s on — if you look at Twitter, you’ll see ISIS supporters saying, ‘This is what Americans believe about Muslims, we ought to get going and do some more damage,’ basically.

That answer rendered Brzezinski momentarily speechless. “That’s just — what’s going on? Anybody want to help me out?”

Dean continued to insist Clinton had been misinterpreted. “I don’t think ISIS itself has made a video, but it’s all over the Arab world and ISIS is using the video of Donald Trump trashing Muslims to recruit, that is true.”

“I’m sorry, where are you getting this?” laughed Brzesinski.

“Just look on Twitter,” Dean responded, helpfully holding up his phone to illustrate how one checks Twitter.

The New York Times‘ Nick Confessore jumped in to point out that every fact-checker that ruled on Clinton’s claim found it to be false. “If we’re going to slam Carly Fiorina on the Planned Parenthood video, if we’re going to slam Donald Trump on New Jersey, this is the same thing. Isn’t it?”

That answer was again met with more awkward silence. “Well, there you have it,” Confessore deadpanned to host Joe Scarborough‘s laughter.