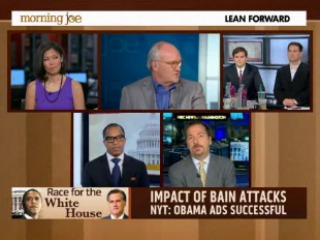 Previously, there had been talk — both by programs, like CBS News, and Obama’s own surrogates and supporters — that the Obama campaign’s negative ads about Mitt Romney‘s past at Bain were fruitless and “not sticking” with voters.

Mediaite columnist Tommy Christopher had steadfastly maintained that this criticism was based on “nothing,” and that data even suggested that the attack ads were actually proving effective.

That sentiment was echoed on Monday’s Morning Joe, when MSNBC’s Chuck Todd noted that the Romney campaign’s new negative ad featuring 2008 footage of then-Democratic presidential hopeful Hillary Clinton saying Shame on you, Barack Obama“ is “tacit acknowledgment” of the success of the Obama campaign’s negative attacks on Romney. This is bolstered by a New York Times report that the anti-Bain ads are “starting to make an impact on some undecided voters, according to strategists from both sides.”

“Two months in a row,” Todd added, “we saw the President outperform [Romney] in swing states.” However, he was careful to point out that we’ve yet to know for certain whether it’s the Bain attack ads specifically that are responsible for this, or whether it’s the broader issue of Romney having touted his business experience in Massachusetts.

When panelist Donny Deutsch said he thought the Republicans were running a successful ad campaign, Todd was quick to note that the Romney campaign has only begun unleashing negative ads — and that only time can tell if these prove effective — not to mention that Romney has three separate entities running ads on his behalf, which tends to dilute messages more than one unified, organized campaign such as that for Obama’s re-election.

Mike Barnicle later opined that Obama’s ads have “the sound and the smell” of class warfare to them. Well, noted Mark Halperin, “the President has cast his lot with a certain point of view about the economy, and some people can call that class warfare.”