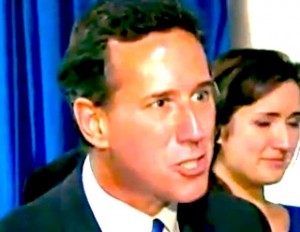 Like morgue technicians conducting an autopsy on a body, the panelists on MSNBC’s Morning Joe picked apart at the corpse of Rick Santorum‘s presidential campaign and tried to evaluate what went wrong for the erstwhile Republican hopeful. Host Joe Scarborough surmised that, had Santorum made more of a focus on economic populism, he would’ve been able to survive the onslaught of the Mitt Romney “Death Star.”

Mike Barnicle agreed, but thought a more significant reason for Santorum’s undoing was that voters were ultimately turned off by his anger. You might recall, for instance, that a frustrated Santorum once erupted at a New York Times reporter during the campaign.

I don’t think any average person resents or gets angry over someone’s views on the social issues and I think Rick Santorum, maybe because of where he was in the polls and maybe because of the lack of attention that was being paid to him, maybe because he was up against a huge money machine that was into attack mode on everyone who popped up below the fault line running against Romney. He brought to each day, in addition to his views and his strong beliefs and they were his beliefs on social issues and other issues, a level of anger to his remarks that, you know–eyyyhhh–not helpful. It was not helpful. When he spoke about his grandfather there was no anger there. There was feeling. There was genuine feeling that people could clearly identify with, but when he would speak about his opponents and his views on issues and how they were covered by the mainstream media, there was there a level of anger within him that caused a lot of people to say “ooh, ooh, ooh.”

Watch Barnicle’s analysis of Santorum’s failed campaign below via MSNBC: