Mike Huckabee: GOP Candidates Are ‘Destroying Each Other’ Trying To Win Race
video

Mike Huckabee: GOP Candidates Are ‘Destroying Each Other’ Trying To Win Race 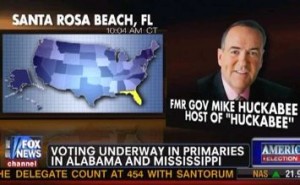 On Fox News earlier, former Republican presidential candidate Mike Huckabee advised the current presidential candidates to stop fighting with each other over which of them is the most conservative candidate because “compared to Barack Obama, they’re all conservative.” Huckabee warned that the negative nature of the race has boiled down to which of them is the “meanest junkyard dog.”

RELATED: Mitt Romney On Rick Santorum: We’ve Seen What Happens When A President ‘Has No Experience Running Anything’

Huckabee first gave his analysis of what to expect in tonight’s primaries, saying Mitt Romney needs to show how well he can do in Southern states like Mississippi and Alabama. The fact that Romney is doing well now in the polls against Rick Santorum and Newt Gingrich is an accomplishment in itself, Huckabee said, because it serves as proof that he can still get good numbers even in unfamiliar territory. He did agree that Gingrich’s Southern ties should give him the advantage, but noted that Santorum connects well with “values voters.” But no matter what happens tonight, both Gingrich and Santorum will forge ahead, trying to make the case that they are the stronger “Not Romney.”

Huckabee said at this point in the race, “there’s no reason for anyone to get out” because anything could happen in the next few weeks or months. He dissented with those who want Romney to be crowned the presumptive nominee already, saying it would not be fair to the other candidates. At this point, any candidate could make a gaffe or do something else that could end their campaign once and for all.

Jon Scott asked Huckabee if he thought the GOP candidates have been “destroying each other” in their quest to win the nomination. Huckabee completely agreed.

“I totally agree that it’s been a little bit absurd, especially when the big argument is ‘Mirror, mirror, on the wall, who’s the most conservative of them all?’ The truth is they’re all conservative, and some of them more so in a few areas than others, and then, you know, some can point to some vote somebody made or a comment they made. But compared to Barack Obama, they’re all conservative. And it’s a ludicrous argument to continue to try to shred each other.”