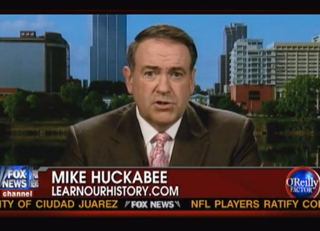 Mike Huckabee made a midweek stop on the O’Reilly Factor tonight prompted by the controversy surrounding his new children’s education cartoons. One cartoon in particular that explains the events of September 11, 2001 has received significant criticism, both from those who believe the cartoons are biased in favor of the Bush administration and those that worry Huckabee is making money off the terror attacks. Today, Huckabee addressed the latter, saying criticizing him in such a way would be like condemning Michael Moore or Steven Spielberg for their work.

Huckabee blasted the criticism to host Bill O’Reilly, noting that most of it was coming from “BSNBC” (get it?) and lamented only that the father of a fireman who died on September 11th had been upset by the attacks. That said, he clarified that a “team of experts” wrote the cartoon scripts, not him, and that their goal was to “take kids through American history in a positive way.” “It is very frustrating that this network who has fewer viewers than you have people going to the bathroom during the break,” he joked, was after him.

O’Reilly, on his end, was surprised. “I saw the video, there’s nothing offensive about the video.” He also noted that the firefighter’s father who was offended wasn’t “a loon… he looks like he’s annoyed that you may be making money from this exposition.” Huckabee addressed both the point that the left was offended by the video itself by arguing that “the far left loves to attack somebody for their character and their intent because they really can’t argue on the point of content,” but took more care in answering the criticism that he was making money.”Michael Moore made $222 million dollars on Fahrenheit 9/11,” he noted, but no one attacked him for it. He then added that attacking him would be “like saying Steven Spielberg is cashing in on World War II or the Holocaust because he made Saving Private Ryan and Schindler’s List, that’s absurd.”