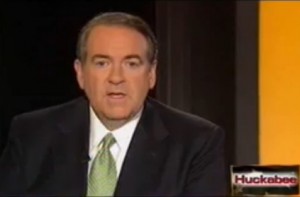 Former Arkansas Governor and Fox News host Mike Huckabee continues to cast about for reasons to blame the horrific mass murder at Sandy Hook Elementary School on everything but guns, and anyone but the shooter, and he’s getting very creative. Responding to backlash against his Friday remarks about the removal of God from public schools, Huckabee told his Fox audience that the massacre wasn’t the result of a lack of prayer in schools, it was the result of the prayer and The War On Christmas™, and contraception, and maybe the gays (he didn’t quite come out and say that one), and… the practice of psychiatry?

Gov. Huckabee crammed a whole lot of stupid into his commentary, slamming the “predictable left” for interpreting his remarks on Friday, when Neil Cavuto asked him how God could allow such a tragedy, to mean that he was saying the shooting would not have happened if prayer were allowed in school. “I said nothing of the sort,” Huckabee explained, and while that’s not exactly what he said, it’s a pretty fair reading, as Huckabee himself seems to confirm by adding “It is far more than taking prayer and Bible reading out of the schools.”

See, it is the prayer, but also a bunch of other stuff he forgot to mention Friday. Stuff like:

The Christmas, contraception, and gay things are drawing the most attention because they’re such predictably divisive cultural issues, and while they’re all equally stupid, it’s Huckabee’s remark about psychiatry that’s truly breathtaking. It has been (shoddily) reported that the Connecticut shooter suffered from an as-yet-unidentified “personality disorder,” but Huckabee seems to be saying that we’re doing too much diagnosis and treatment of mental illness, and not enough, what, casting out of demons? As far as I know, treating mental illness is not controversial among Christians, so maybe the power of Christ should compel him to shut the Huck up before he makes his brethren look any worse.

He goes on to say “And to get to where that we have to abandon bedrock moral truths, then we ask, ‘Well, where was God?’ And I respond that, as I see it, we’ve escorted Him right out of our culture, and we’ve marched Him off the public square and then we express our surprise that a culture without Him actually reflects what it’s become. As soon as the tragedy unfolded, I think God did show up.”

So, we relocated God to a place where he couldn’t quite get there in time? Was God’s Prius low in juice? Or is Huckabee saying that God showed up a minute late to spite us for treating the mentally ill? Huckabee doesn’t know what the parents of those children believe, yet he suggests they may have killed their own children with it.

There is still much that we don’t know about this shooting, but what we do know is that those innocent children were not killed by birth control pills or lawsuits about Christmas, they were killed by a man with a portable arsenal that could have defeated George Washington’s army, who may have also had a serious mental illness, and if Mike Huckabee has his way, we won’t do anything about either of those things.