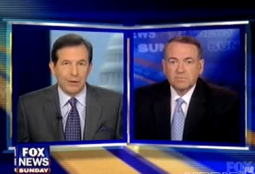 Proof that a little queer theory can be a dangerous thing in the wrong hands: Fox’s Mike Huckabee went on Fox News Sunday to defend his use of the phrase “ick factor” when talking about gays and same-sex marriage in the New Yorker. Host Chris Wallace — who apparently has never heard of the largest LGBT rights organization in America, the Human Rights Campaign — asked the former presidential candidate to explain the “ick factor.”

Huckabee had previously defended his comments by saying that the “ick factor” was a phrase used by University of Chicago law professor Martha Nussbaum, but Nussbaum said she’d never used the term in explaining “projective disgust.”

Turns out Huckabee may be a fan of the gay news website the Edge, were the term “ick factor” is attributed to Nussbaum. In fairness to Huckabee, the “ick factor” is a term used in queer theory and in discussing why gay rights haven’t advanced. The phenomenon refers to a certain disgust to the idea of gay (male) sex by the general population.

In the New Yorker, Huckabee said:

When pressed by Wallace on FNS, Huckabee said he’d attributed the term to Nussbaum because of the story in the Edge and that he was just trying to use the lingo commonly heard in the gay community to explain why he thinks same-sex marriage is a bad idea.