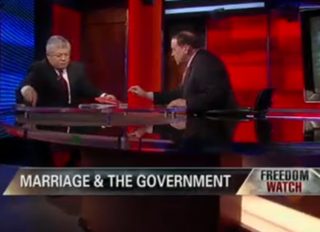 In anticipation of his new book (and perhaps of his 2012 run), Mike Huckabee has been making the rounds lately and upping the ante on his controversial statements: telling Chris Matthews he’s “off his meds,” claiming Muslims believe anyone who follows Jesus “is an infidel and should be obliterated,” etc. But his family values conservative style ran into a brick wall last night as he tried to debate Judge Andrew Napolitano on same-sex marriage.

Judge Napolitano gave Huckabee the first word on the Freedom Watch debate, asking Huckabee whether he believed President Obama’s decision to not really enforce the Defense of Marriage Act was legally correct. “I’m not a lawyer,” Huckabee admitted, adding, without skipping a beat, “he was legally wrong.” He went on to explain that, to him, “the most basic form of government is the family… Mother and father raising children, that’s government.” Changing the definition legally, he adds, would be a slippery slope towards polygamy.

That argument doesn’t quite fly with Judge Napolitano, who then employs what is possibly the rarest argument against preventing same-sex couples from marrying, throwing Huckabee for a bit of a loop: “It’s a contract,” he notes, “an agreement between two people whose hearts have joined together. What business is that of the government?” He further adds that nowhere in the Constitution is the federal government given permission to become involved in marriage, making it difficult for him to see how a federal legal definition is constitutional. Huckabee contends that the government wastes extraordinary amounts of money subsidizing single parents, and that the poverty levels for unmarried parents are unacceptably high.

“But none of that has anything to do with the same-sex couple down the block being allowed to live together and be married,” Napolitano counters, asking Huckabee why he seems so keen on wanting “to get into their bedroom.” Huckabee, with a look on his face that indicates he just had a mental image he really didn’t want to see, quips that conservatives “don’t want to see what’s going on in that bedroom,” and then resorts to arguing that natural law overrules the Constitution (again, Huckabee is not a lawyer). “This is the preacher in you, not the governor,” Napolitano advises. Huckabee tries to rebut this claim but ultimately notes that marriage is between a man and a woman to him “and to God.”

While the topic will be on the minds of many, most cable news outlets end up discussing social issues among like minds more than debating the issues with people who disagree. It is refreshing to watch a conservative attempt to reconcile the Constitution with laws like the Defense of Marriage Act, and even more refreshing to hear someone argue for marriage– straight or gay– being a private and not legal matter in its entirety. The only Constitutional issue left out of the debate was the legality of marriage in its entirety, given the First Amendment right to freedom of religion (and the fact that marriage has been for most of human existence a religious rite), but given that all parties involved here would be arguing for universal annulments on that point, probably best for their wives that no one brought it up. Huckabee does, to his credit, manage to find a libertarian argument for the government being involved in heterosexual marriage, though: deadbeat dads are costing the nation millions in government subsidies. This was one point the Judge could get behind.

The segment from last night’s Freedom Watch via Fox Business below: